Posted on October 5, 2012 by meridencivilwar

Join us at the beautiful, new Lincoln Middle School Theater, 164 Centennial Ave., Meriden CT. Tickets are $5 at the door. Park free in the school lot.

The Civil War, between the Northern and Southern states, is an important part of our culture, our history and the American soul. This concert and the events tomorrow take a moment to reflect and educate on the 150th anniversary of the Civil War, 1861-1865, one of America’s most turbulent times.

Most of tonight’s music is from the Civil War era and created by Americans to show the struggles and sacrifices in the daily lives of men, women and children. Some music is patriotic, some bold and some sad—all feelings found in our lives today, but keenly felt during wartime, right here, in Meriden, Connecticut.

Located near the original site of Civil War training Camp Tyler on the Quinnipiac River, members of the 2d Connecticut Volunteer Heavy Artillery will set up camp as they portray life in the Union Army. A full program of events is scheduled (details on this site). Admission is free. Food and beverages available for purchase.

Posted on October 2, 2012 by meridencivilwar

Dinner time at camp for officers and soldiers.

Dinner time at camp for officers and soldiers. (photos: Library of Congress)

The Challenge of Feeding an Army
One of the biggest obstacles to tasty food was inexperience. Men of this time period had little knowledge of food preparation, a chore typically left to women of the house or female slaves. Male army soldiers were forced to adjust to battlefield eating.

Additional Food in the Civil War Rations
The armies also supplied fresh vegetables (sometimes fresh carrots, onions, turnips and potatoes), dried fruit, and dried vegetables as part of the ration when they were available. Men also foraged and scavenged the countryside for fresh food. Many also received supplements mailed from their family, offered by townspeople, or they could buy foods from sutlers who followed the troops selling pickles, cheese, sardines, cakes and candies.

A variety of food, beverages and snacks are available for purchase, including hot coffee—and you won’t have roast and grind your own beans!

Posted on September 27, 2012 by meridencivilwar

President Abe Lincoln, portrayed by Lewis Dube, will visit the Civil War Encampment in Meriden on Saturday, October 6, 2012, where he’ll be wandering around camp, hanging out with the troops and talking to visitors.

A video featuring highlights of Lewis Dube’s An Evening with Abraham Lincoln was published on YouTube, September 26, 2012. This dramatization of Lincoln’s presidency was performed and filmed at the Howard Whittemore Memorial Library in Naugatuck, Connecticut.

Highlights from “An Evening with Abraham Lincoln,” a portrayal by Lewis Dube, runs for 6:50 on YouTube.

“You entertained and enthralled the audience.” … George H. W. Bush

Lewis Dube who has studied at Yale’s Drama School, is a nationally renowned Lincoln Actor, bringing the 16th President to life to thousands of Lincoln fans. Lewis Dube has appeared at venues across the country including several presidential libraries and has appeared on ABC, CBS, History Channel, Fox and CPTV. 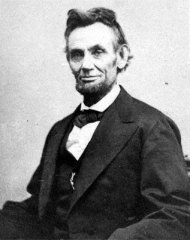 Lincoln left New Haven about 6:30 p.m. on the 6th of March, 1860, aboard a special train bound for Meriden. On his arrival, Lincoln was escorted from the station to the Town Hall on East Main Street in a torch-lit procession.

For the benefit of hundreds, if not thousands, who may wish to hear the Hon. Abraham Lincoln and may be unable to hear him in this city tonight, arrangements have been made to run an Extra Train to Meriden on Wednesday night.

Evening special train takes Lincoln and 300 supporters to Meriden. Torchlight procession escorts him to hall, where he speaks for more than two hours.

Join us next Saturday, October 6th, from 9 a.m. to 3 p.m. at Meriden Civil War Encampment for a full day of education, entertainment and fun for all ages. Bring your camera!

Posted on September 22, 2012 by meridencivilwar

The banner is up, the concert programs are printed, the tee shirts are done too. The final details are falling into place as we are just two weeks away from the Meriden Civil War Encampment.

Posted on September 21, 2012 by meridencivilwar

Meriden Civil War Encampment to get air time on The Mayor’s Mic.

Civil War Encampment planning committee members Marge Bucholz of the 2d Connecticut Volunteer Heavy Artillery (SCVHA), and JoAnne Grabinski of the Quinnipiac River Watershed Association (QRWA), talk with Meriden Mayor Michael Rohde. Marge arrived at the City Hall studio in her handmade 1860’s era day dress that one wears when going out to visit. The Mayor interviewed Marge and JoAnne about three events honoring the 150th anniversary of the Civil War and Meriden’s contribution to the war effort. The interview will soon appear on the Mayor’s bi-monthly television program, The Mayor’s Mic. 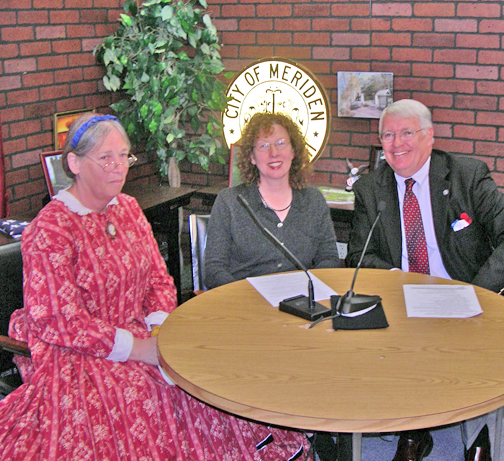 Meriden Civil War Encampment, Saturday, Oct. 6 — An authentic living history Civil War Encampment will be set up by SCVHA members who will act in roles of militia and others associated with camp life. A full day guest speakers, theater and music performances is planned, with fun and entertainment for all ages. Food and beverages available for purchase.

Park at Lincoln Middle or Platt High schools for shuttle to encampment site. See other pages on this site for detailed information and complete program schedule. 9 a.m. to 3 p.m. at Dossin Beach Park near the original location of Civil War training Camp Tyler.

The Mayor’s Mic can be seen on Cox Public Access Channel 14 and ATT U-Verse Public Access Channel 99 (scroll to Meriden Community Television). Mayor Rohde interviews key city personnel and representatives of local non-profit organizations to address topics of interest to all citizens. Shows are aired 7 days a week at 7am, 11am, 3pm, 7pm, 11pm and 3am. You’ll find a complete program line-up on The Mayor’s Mic web page at CityOfMeriden.org.

Posted on September 2, 2012 by meridencivilwar

Tickets at $5 per person available at the door. Additional donations to support Meriden ArtsTrust, Inc. will be gratefully accepted. Park free at Lincoln Middle School lot.

Financial support for this community event provided by the Meriden Foundation.

Posted on August 20, 2012 by meridencivilwar

BE PART OF A LIVING HISTORY EVENT:  This historical event honors the 150th anniversary of the American Civil War and recognizes Meriden’s contribution to the war effort during our country’s most turbulent time.

The Civil War Encampment event
and your commitment will be over in a day—
but what a grand day it will be!

We need You!  Sign up today.  No special skills are required and you’ll work with a dedicated team of participating non-profit groups and community leaders. Learn more about the Civil War Encampment on this site’s About page.

Posted on August 3, 2012 by meridencivilwar

BE PART OF A LIVING HISTORY EVENT:  This historical event honors the 150th anniversary of the American Civil War and recognizes Meriden’s contribution to the war effort during our country’s most turbulent time.

DETAILS & VENDOR APPLICATION:  Learn more about the Encampment on this site’s About page. For details and a vendor application please email Lisa (remove brackets, spaces and use @ sign):  LionLisaP [at] yahoo.com

The Midsummer Celebration invited everyone to enjoy the outdoors—a Butterfly & Bee Garden, a hike in the woods or paddling on Hanover Pond—so much natural beauty in our own backyard and throughout the Quinnipiac River Watershed area.

Marge Bucholz of the 2d Connecticut Volunteer Heavy Artillery (SCVHA) stopped by in her 1860’s era day dress that one wears when going out to visit. Even at 85 degrees the long dress was comfortable; hoops prevent skirts from clinging.

Midsummer Celebration music was performed by the Central Connecticut Civic Youth Orchestra, a project of the Meriden ArtsTrust, Inc. (MAT).

QRWA and MAT will team up again, joining SCVHA and the Meriden Historical Society to present a living history Civil War Encampment at Dossin Beach Park. The events are sponsored by the Meriden Foundation and include a Civil War Remembrance Concert on Friday, Oct. 5 and the Encampment on Saturday, Oct. 6, 2012.

Join Marge and the 2d Connecticut Volunteer Heavy Artillery as they share what life was like during the Civil War. A full day of entertainment, education and fun for all ages is planned. Free admission. Free parking. Free shuttle to site. Food and beverages available for purchase.

Connecticut and the Civil War online at CCSU site

Posted on June 6, 2012 by meridencivilwar

The planning committee of Meriden’s Civil War Encampment is happy to announce our event listing on Connecticut’s premiere Civil War website:  Central Connecticut State University (CCSU): Civil War where you can also learn about Connecticut’s and your town’s involvement in the American Civil War.

Connecticut Commemorates the Civil War is a collaborative effort by the state’s many historical societies, museums, libraries, and universities to study and inspire public awareness of the American Civil War and Connecticut’s involvement in it.

Perhaps the most trying period in the nation’s history, the War of Rebellion rocked America to its very core. Some 620,000 soldiers perished (recent scholarship argues the more accurate number is 750,000) and every aspect of the society, both north and south, was unalterably impacted.

Connecticut was no different. The little Constitution State sent 55,000 men to war, which represented 12% of the total population. For men between the ages of 15-50, the number was actually 47%, a remarkable figure unparalleled in the state’s history. Connecticut created 29 infantry regiments, as well as light and heavy artillery units and cavalry units. Connecticut industry produced massive amounts of weapons and other war materiel. Some historians note that the state supplied a full third of Union weaponry.

Meriden’s Civil War Encampment
See our listing (below) along with other events at CCSU:  Civil War Events Calendar

An historical event to honor the 150th anniversary of the Civil War and to recognize Meriden’s contributions. The event is a collaborative effort of the 2d Connecticut Heavy Artillery, Meriden Historical Society, Meriden ArtsTrust, Inc. and Quinnipiac River Watershed Association and is made possible through a generous grant from the Meriden Foundation.